Community support a drop in the bucket for Petone Budget Service It’s the bucket test at Petone Budget Service (PBS) which helps bring the financial message home for some of the most vulnerable people in their community.

Based in the Wellington region, the budgeting service has had a presence in the community since 1985 as part of the Citizens Advice Bureau. It’s been its own entity since 2014 and today is home to five Financial Mentors.

Financial Mentor Awhina Ulutuki explains as part of the EnergyMate programme, they’re invited into the homes of their whānau to demonstrate how small changes can make a big difference.

EnergyMate is a partnership between power companies, community budgeting support services, Electricity Retailers of New Zealand (ERANZ) and FinCap to help households get on the power plan that best suits their needs.

“It’s about making the right choice and which option is easier for our whānau,” says Awhina.

In her role as an EnergyMate coach, Awhina visits people’s homes and takes a bucket to measure the amount of water which is being used during a one-minute period.

“If it overflows, it means they’re using too much. They’re like ‘oh, I didn’t realise I was using so much,” she says.

This can lead to conversations around shorter showers, checking water pressure and temperature or making sure cylinders are wrapped.

Awhina also educates whānau about other cost-saving techniques they can use, like turning appliances off at the wall when they’re not being used or not leaving mobile phones on charge overnight.

She says people are often surprised at how much power they’re using and what they could be saving and using the bucket test helps drive this reality home.

The $120 power credit which was introduced by ERANZ last year to help people financially during the peak of the COVID-19 pandemic has also been a “huge” help, according to Awhina.

But with this due to come to an end this May, PBS is focusing on making sure people are prepared to get through this winter without the extra support.

Alongside the power credit, PBS has access to other funds they can access to help people in financial hardship. 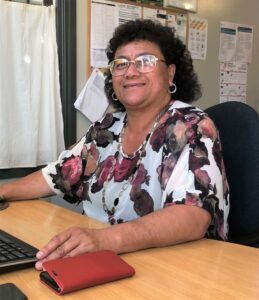 One of these is provided by Tākiri Mai te Ata – a collective of seven health, education, justice and social service providers in the region for everybody from tamariki to kaumatua – and Hutt City Council.

They offer initiatives like Homeless Prevention and Sustaining Tenancy.

Manager Lanscella Sue (pictured right) says having the discretion to use funds as needed has helped relieve the financial burden on many whānau.

They’ve seen a massive increase in Work and Income applications or KiwiSaver hardship withdrawals over the last year.

And if things get too tight, they can also help whānau with an application to Newtown Ethical Lending Trust or Ngā Tāngata Microfinance for an interest-free loan or low interest (tailored for people on low incomes).

Some of the issues facing this community are rent increases, impacts from COVID-19 and job losses with the recent redundancies of the Imperial Tobacco plant in Petone.

Lanscella says PBS works closely with other organisations and if people aren’t put in contact with them through friends or whānau, they’re usually referred from one of these services.

But it’s not all about getting people to the breadline.

Lanscella says some of the whānau they’re working with need support for things like purchasing their own home (or a family home).

They’ve been working closely with a local mortgage broker who they have used for their MoneyMates sessions, and also education in community organisations.

While the reality is not everybody will take the path recommended by the Financial Mentors, this makes each success even more satisfying.

Lanscella says “being able to help whānau and see the reward” is what keeps her in the role.

One example they’ve seen recently is a woman named Sarah* who was working in a contractual role which was leaving her worse off financially. She had purchased a new car on finance to allow her to take on this new role.

The car was written off in an accident (which wasn’t her fault) and although she was covered and paid out by insurance, she still ended up left in thousands of dollars of debt shortfall.

Around the same time, she asked her landlord to make some small changes to home for her whānau (including a newborn baby) to make their house liveable, resulting in an eviction notice.

On top of this, her husband lost his job unexpectedly and this eventually led them to sleeping in their car – just after her baby had had surgery.

Financial Mentor and Community Educator Jennifer Gini says they’ve been working with Sarah to help her get her life back on track – and not just her finances.

Jennifer is working closely with her to ensure her employer had her on the right contract (employee/contractor) as there may be an unfair disadvantage case, taking a case to the tenancy tribunal and has put an application for her to get new permanent housing for her whānau.

She says the work they do can often have a ripple effect in their community.  In some cases, they’re seeing the first generation of a whānau attend university.

“Our aim is to make a real difference to their lives and they’ll tell us this. We have the potential to really change people’s lives and help them and that’s incredible,” says Jennifer.

“I love being able to help our community.”

She says the work they do can often have a ripple effect in their community.  In some cases, they’re seeing the first generation of a whānau attend university.

“We actually make a big difference to their lives and they’ll tell us this. We have the potential to really change people’s lives and help them and that’s incredible,” says Jennifer.  “I love being part of our community.”

This may only be a drop in a bucket compared to how much impact the service makes in the community, but this shows small steps can lead to big change.

Whānau renting from private landlords in the Lower Hutt area may benefit from the collaboration with Takiri Mai Te Ata, so please contact PBS by emailing manager@petonebudget.org.nz.